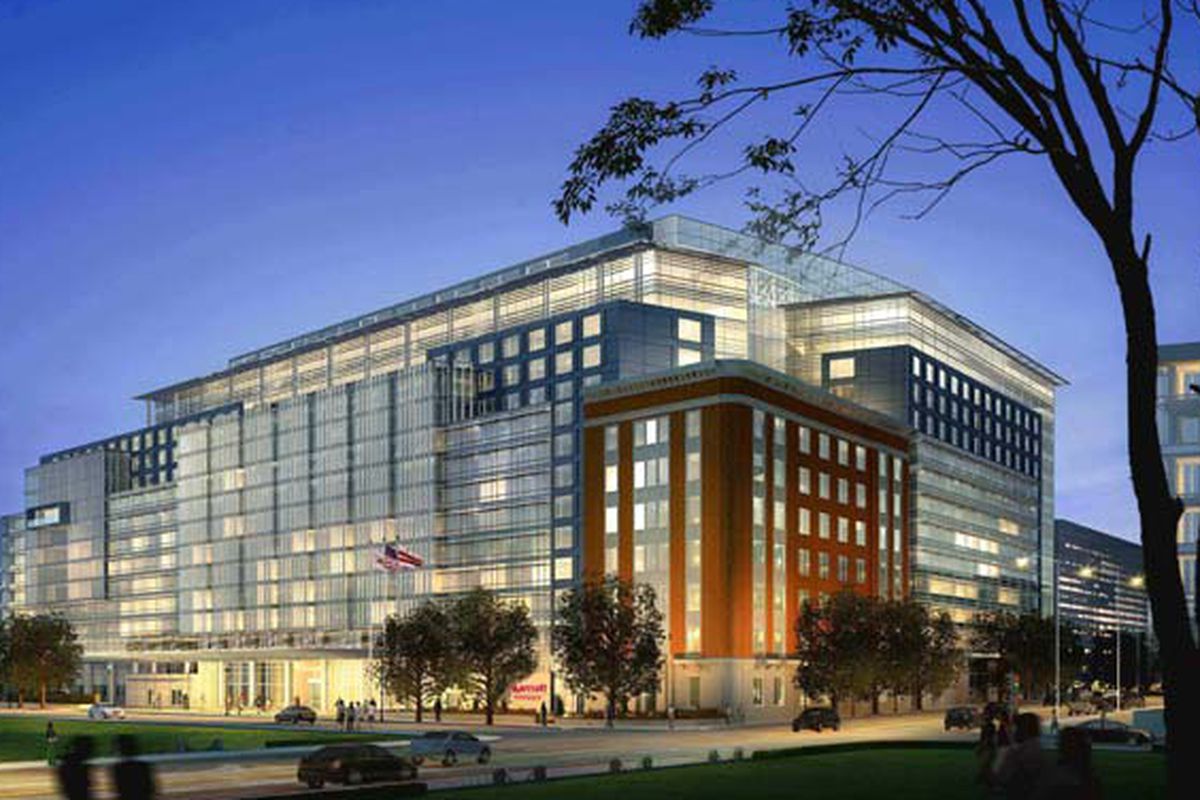 Posted at 22:22h in Digital by Damon M. Banks
Share

I recently attended an exciting event for so many people in the Washington, DC area connected to not only the city politics, but also the tourism and hospitality industries. Marking a major milestone for both the Marriott brand and the City of DC, J.W. (Bill) Marriott, Jr., executive chairman of Marriott International, DC’s Mayor Vincent C. Gray, and an impressive gathering of dignitaries celebrated the topping off of the Marriott Marquis Washington DC, signifying that the 15-story property has reached its final construction height. This “topping off” ceremony was especially symbolic to so many present who have been working for over a decade, in many cases, to see this property come to fruition, and are now closer than ever to welcoming the hotel’s first guests in May 2014.

“The Marriott Marquis is important not only for the District’s convention business, but for our economic development and job creation,” said Mayor Vincent C. Gray, District of Columbia. “We are a world-class destination and with the addition of this convention hotel, the District, our nation’s capital, is well on the way to be the meeting destination of choice for people not only in the United States but around the world.”

Joining Mr. Marriott and Mayor Gray for this momentous occasion were city officials, community leaders, and representatives from Marriott International, Inc., Quadrangle Development, Capstone Development, Destination DC and Events DC. I was fortunate to be included with all the officials and invited media to sign the very large steel beam, which was lifted to its position on the top floor of the building at the end of the event. (I guess this means that this building officially has my “signature of approval!”) Though still very much in construction, I joined Mr. Marriott and his team on a tour of what will be an over-the-top lobby atrium, sure to impress, which could only fit in a hotel property of this magnitude. Here is where we witnessed the soon-to-be completed iconic centerpiece of the hotel – a 56-foot sculpture named “The Birth of the America Flag” created by Baltimore-based artist Rodney Carroll. Carroll’s sculpture will be the largest piece of art in any Marriott hotel.

“Our company’s roots run deep in Washington, DC. More than 85 years ago, my parents opened a restaurant just up the street from the new Marriott Marquis Washington DC,” said J.W. Marriott, Jr., executive chairman, Marriott International, Inc. “When it opens, the Marriott Marquis Washington DC will quickly exemplify the transformation our Marriott Hotels brand is undergoing as it re-imagines the future of travel for the next generation. I am truly excited for the District of Columbia and look forward to welcoming the Marriott associates who will deliver the quality service that is Marriott.“

This $520-million, four-star hotel will have 1,175 rooms including 49 suites, and over 105,000 square feet of function space when it opens May 1, 2014. Connecting directly to the always-busy Walter E. Washington Convention Center, this property will prove to be the missing piece of the puzzle when it comes to large conferences and events being able to establish themselves in DC. This combination will certainly rival any convention facility in the country, and with the surrounding areas being heavily developed over the past few years, this corner of DC will prove to be a vital element to the success of DC’s tourism.

“The opening of the Marriott Marquis Washington DC in May 2014 reinforces Washington, DC as a top-tier convention destination with a world-class headquarters hotel,” said Gregory A. O’Dell, president and CEO of Events DC. “The Marriott Marquis will help Events DC create even greater economic benefits for the residents and businesses of the District of Columbia, and we look forward to building an even stronger partnership with Marriott for many years to come.”

As it was stressed during this event, unique to the property is that it is essentially as deep into the ground, as it is above ground. Beyond the almost twelve hundred rooms and suites, the property will also include a 30,000-square-foot Marquis Ballroom, two 10,800-square-foot ballrooms, more than 53,000 square feet of superior meeting rooms, an 18,800-square-foot indoor event terrace and a 5,200-square-foot rooftop terrace. Also unique to this hotel is that it was designed to earn LEED ® Silver (Leadership in Energy and Environmental Design) certification, registered by the U.S. Green Building Council (USGBC), making it one of the largest hotels in the country to earn Silver certification.

As Mayor Vincent C. Gray highlighted during his presentation, the DC area is in a state of mass developing with more than 80 cranes seen scattered along the city’s skyline. The Marriott brand has over 500 properties throughout 60 countries, but the DC area remains “home” to this powerful hospitality brand. With a project as massive as this one, it will certainly be yet another “feather in the cap” for team Marriott.